This is a collated collection of the most relevant thermal regulation and sport performance research papers compiled by scientific advisor and researcher Carles Tur Carbonell.

If you feel that there are further papers and studies that should be included - please contact us. 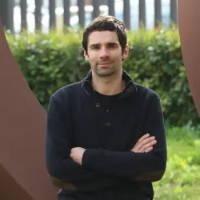 Carles Tur Carbonell is a high-performance coach with many years of experience. He currently works for the Spanish Olympic organization and is also preparing to release a new publication due in Autumn 2022.

Carles was an early adopter of the CORE sensor technology and has been a long-term collaborator in testing and research. We are priviledged that he was able to prepare and summarize the most important research papers on thermoregulation in performance sport.

Additional information and resources can be found at

Summary text: This current review, led by one of the world's leading experts on heat physiology, Julien Periard, brings us up to date on the latest developments in thermoregulation compression and the impact of heat on the human organism. In the review, he first delves into the mechanisms of thermoregulation and the systemic effect on different parts of the organism, as well as the balance of the water balance. It also examines the impact of heat on the body and how it affects exercise performance. Finally, this review discusses how to mitigate the effects of hyperthermia and hypohydration and the impact it has on exercise performance in a hot environment through acclimatization strategies, cooling strategies and hyperhydration.

Of note: A current paper from one of the world's leading experts on acclimatization and strategies to mitigate physical exercise or competitions in hot environments. A "must" for any trainer, dietician, nutritionist or physiologist involved in endurance sports in hot environments. 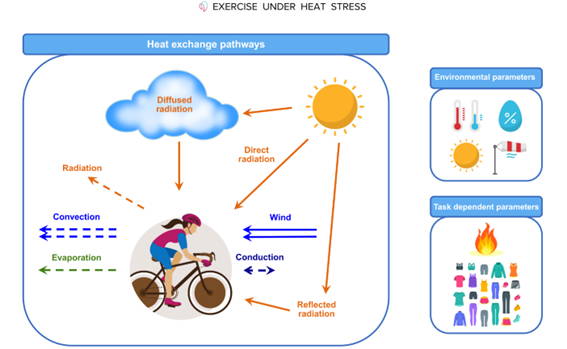 Summary text: Gastrointestinal problems in endurance sports report a high prevalence mainly due to two physiological factors: firstly, a splanchnic hypoperfusion and secondly, an increase in the activity of the sympathetic nervous system. These factors are magnified in very hot training and/or competitions. In addition to delving into the etiology of the factors that trigger this common problem, the authors provide us with tools through hydration, diet, cooling strategies and supplementation to mitigate this frequent problem in nutrition and sports physiology in endurance sports.

Of note: It is really important to know one of the biggest problems that exists within endurance sports competitions, GI (gastrointestinal) problems, both from the point of view of their origin and etiology as well as possible solutions to mitigate this frequent problem. 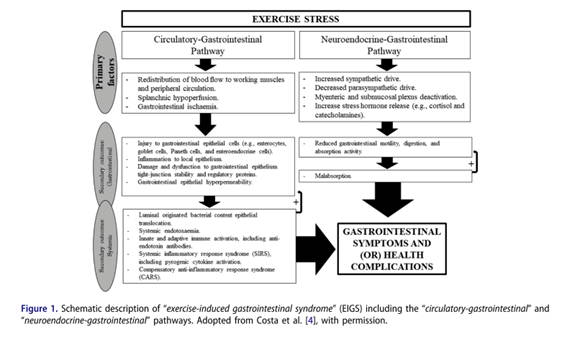 Summary text: In this consensus of the Australian sports dietitians, a complete scientific article is concisely collected. It covers several key points to mitigate the effects of physical exercise in hot and humid environments, such as: concept of thermoregulation in the body; gastrointestinal function and integrity; adaptation strategies (acclimation and acclimatization); fluids and electrolyte balance; hydration strategies before, during and after exercise; the main cooling strategies before and during physical exercise (pre and per cooling); tips for travel and competitions in hot environments; as well as relevant considerations for Paralympic sports.

Of note: An updated general consensus reference written by the world's leading authors in endurance sports, summarizing all the key points to keep in mind when training and competing in hot environments.

Summary text: This excellent review is a compendium of how any sports professional can learn the best acclimatization preparation for competing in hot and humid environments from the scientific aspects to real practice. The article focuses on two main points. Firstly, it covers the strategies and physiological adaptations for heat relief, detailing the differences between acclimatization and acclimatization strategies as well as the importance of the time-temperature binomial (days and time needed for exposure, as well as the optimum internal temperature (38.5 ºC) to be reached to adapt to the heat) that an athlete must undergo to achieve the desired adaptations. Secondly, it delves into the heat and humidity relief techniques implemented immediately before or during the competitive event. Finally, the article shows examples and practical considerations of how we can implement different acclimatization strategies within an athlete's annual training structure.

Of note: One of the strengths of this article is the theoretical and practical knowledge that we can find to alleviate and mitigate the effects of humidity and competitions in very hot environments. 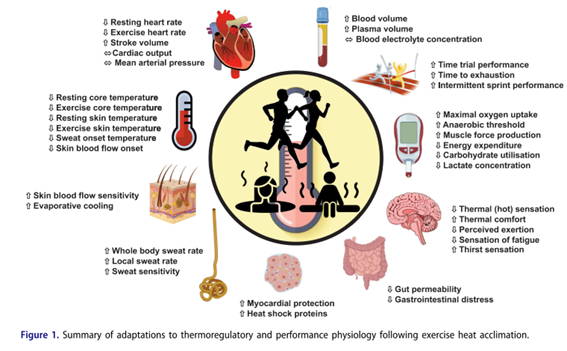 Heat Acclimation Decay and Re-Induction:
A Systematic Review and Meta-Analysis

Of note: The importance of acclimatization to hot environments in endurance sports is well known, but it is also important to know the physiological maladaptations that occur when acclimatization to heat is paused. However, any coach or physiologist should analyze the individual responses of each athlete since the organic response to heat stimulus is totally individual and very varied. 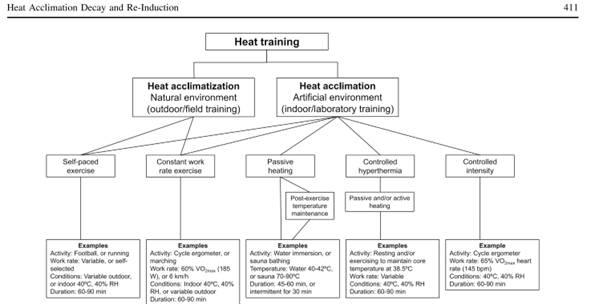 Core temperature up to 41.5ºC during UCI Road Cycling World Championship in the heat

Summary text: In this nice cross-sectional study, we analyze the different degrees of internal temperature reached in the cycling world championships held in the city of Doha during 2016, in the modalities of LRC (individual time trial), TTT (team time trial) and online race in men and women. The temperature during the event was hot, (average 36.9ºC +/- 2.8ºC, with a relative humidity of 24.6% +/- 15.6, resulting in a WBGT of 27.1ºC +/- 2.4ºC. The maximum core temp value reached during the championship was 41.5ºC by a cyclist during the TTT (team time trial), with the majority of the cyclists in the study (85%) reaching a minimum temperature of 39ºC and 25% of the cyclists reaching 40ªC. As a conclusion we can observe that more than 25% of the cyclists reached 40ºC, an internal temperature that is considered a criterion of heat stroke. In spite of this, no cyclist went to the medical services due to health problems related to heat or signs of it. There is scientific evidence that in professional athletes it is common to reach temperatures above 40ºC without any type of health problem.

Of note: As we can see, the range of temperatures in professional athletes can be higher than in amateur athletes depending on the type of test and intensity, as well as environmental factors. Therefore, it is important to individualize the individual temperature parameters of each athlete together with their subjective sensation and performance data to evaluate their sporting performance.

Of note: There are differences in thermoregulation and sweat-motor capacity between men and women, the latter having worse adaptations, being able to reach higher internal temperatures than men and therefore, having more possibility of suffering a heat stroke. Therefore, it should be considered that women should have a longer period of acclimatization to compete in humid and hot environments.

Summary text: Within the current literature there is different evidence that hypohydration may or may not worsen sports performance. In this comprehensive review the authors evaluate the current evidence and attribute two important points at a methodological level to understand the different results of the numerous investigations carried out and offered by the different researchers in the field of sports hydration. Firstly, the subjects of scientific studies are not shielded in the intervention carried out (knowledge of their hydration status), so that performance expectations are introduced. Secondly, many of the methods used to cause the state of hypohydration cause unpleasant and unfamiliar states, affecting the performance analyzed in laboratory tests, and distancing these results from the true performance of the athlete.
When these methodological deficiencies have been corrected, the most current studies suggest that a state of hypohydration of 2-3% of body weight in hot environments decreases athletic performance when little or no fluid is ingested.

Of note: Much of the current methodology causes certain perceptions that modify the performance of athletes, so it is important to read and interpret the methodology of various studies with caution. 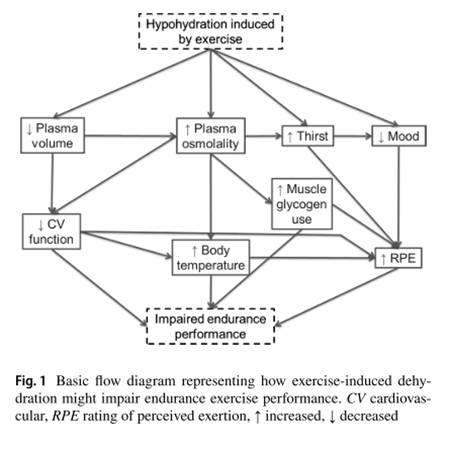 The Hydrating effects of Hypertonic, Isotonic and Hypotonic Sports Drinks and Waters on Central Hydration During Continuous Exercise: A Systematic Meta-Analysis and Perspective

Summary text: When talking about sports drinks in terms of energy or ion content, there is a lot of confusing terminology. In this elegant systematic review by a leading expert in carbohydrate physiology, David Rowlands, he differentiates between the different absorption effects of different sports drinks. Dehydration and plasma depletion states decrease cardiovascular function and long-term sports performance. Sports drinks contain carbohydrates and electrolytes and depending on their formulation can be more (Hypertonic > 300 mOsmol kg -1), similar (isotonic 275-300 mOsmol kg -1) or less (hypotonic < 275 mOsmol kg -1 ) than the blood plasma concentration (isotonic). Therefore, those sports drinks that minimize the reduction or increase plasma volume help central hydration status and performance. Therefore, those athletes consuming hypotonic beverages will have less blood plasma depletion and hydration compared to the other beverages (hypertonic and isotonic and water). It is recommended that the types of carbohydrates to be used are multiple since they increase the ratio of absorption, oxidation and total hydration. Therefore, a drink with hypotonic electrolytes will increase performance and avoid dehydration in long and hot endurance events.

Of note: It is important to emphasize the knowledge of the different types of sports drinks, and a hypotonic solution is recommended for hydration in case of gastrointestinal problems. It is important to remember the prevalence of gastrointestinal GI problems (30-50 % or 30-70 % according to various studies) in endurance athletes and that these are accentuated by hot and humid conditions. 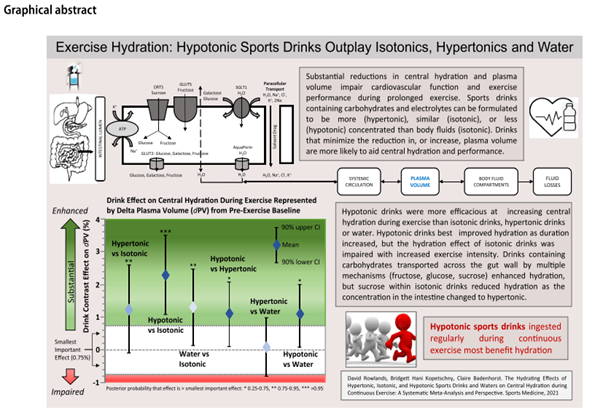 Diagram of different intestinal absorption ratios as a function of beverage concentration.

Summary text: Almost a century ago, A. Mosso wrote the first concept on the relationship of fatigue and its link with muscle, establishing that fatigue was practically an emotion and that it was part of a complex regulation in which it had the function of protecting the human body from pain or physiological damage. This idea was superseded by the English physiologist and Nobel Prize in Medicine, Archibald Vivian Hill, who believed that fatigue was the result of biochemical changes in the muscular extremities, establishing the concept of peripheral fatigue, in which the central nervous system could not make any contribution or control. This beautiful article explains how the brain (known as the central governor), modulates performance and fatigue resulting in a series of complex physiological phenomena that modulate the performance response. This model conceptualizes that the brain is the center of regulation in motor recruitment and therefore in the final activation of the muscles giving a greater or lesser performance. The factors that can affect this greater or lesser performance are not exclusive to biological factors (metabolic, energetic, hydration states, hyperthermia, etc.), but include emotional states, mental fatigue, sleep state, level of motivation, level of recovery from previous sessions, degree of self-belief, psychological abilities, or states of refrigeration prior to a competition are factors that can modulate sports performance, being a complex system in which the factors mentioned interact with each other to give an "illusory" sensation and subjective perception of fatigue modulated by the brain giving a final performance in each athlete.

Of note: It is known that fatigue is a complex phenomenon modulated and interpreted by the governor centers. However, we must not underestimate any peripheral conditioning as aspects of food or sports hydration, as all factors are of great importance and relevance in high performance sports. Nowadays we observe how competitions are increasingly won by a narrower margin, so it is vital that the coach or physiologist is able to see which aspect of fatigue will be the most important to minimize the "illusory" interpretation of fatigue by the central governor and therefore the decrease in performance.