For decades, women have tracked their menstrual cycles by measuring their body temperature. While this tracking is typically done to identify times of highest and lowest fertility, some athletes do it to predict times of maximum and minimum athletic performance. However, the inaccuracy of such thermometers can make it difficult to identify the relatively small rise in basal body temperature associated with ovulation. This is compounded by the temperature measurement occurring after waking, when temperature has typically risen from its lowest point.

Why CORE for cycle tracking?

Using a CORE device can better help identify ovulation. The accuracy and repeatability of CORE is greater than the commonly used ear and forehead thermometers. Also, CORE has the advantage of measuring continuously, so wearing the CORE sensor during sleep allows identification of the true lowest temperature of the day. CORE is the most accurate continuous and non-invasive way of monitoring body temperature.

The chart below shows one woman’s body temperature measurements throughout a month using a CORE sensor. The blue dot shows her basal body temperature (bbt) each day. The start of menstruation is seen on the 11th as her bbt quickly drops. Approximately two weeks later, the small rise in bbt on the 24th of the month marks the start of ovulation. The bbt continues to rise for another week, and it will stay elevated until the start of the next menstruation. This chart is automatically updated each day as the CORE sensor syncs data to the cloud. 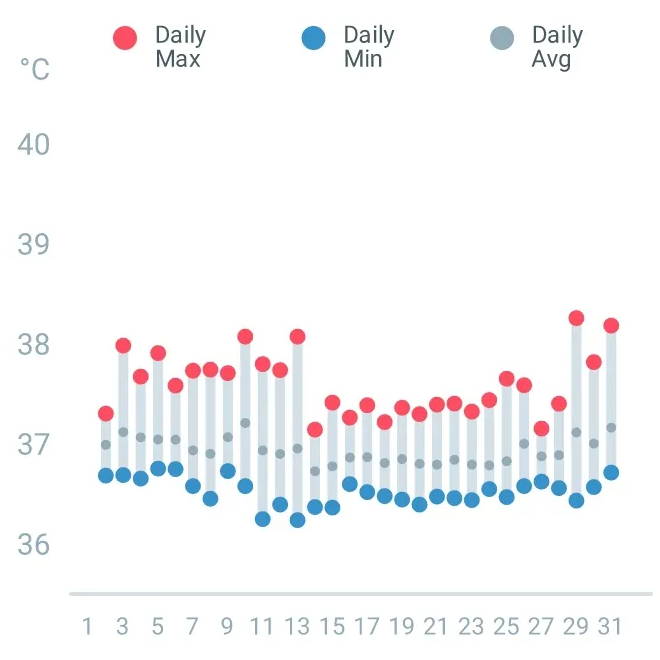 While ear thermometers can also identify the strong rise in bbt after ovulation, the daily temperature readings are much more scattered and make charts more difficult to interpret.

Athletic performance throughout the cycle

Throughout the menstrual cycle, the levels of numerous hormones, including oestrogen and progesterone, continually change. These variations can affect fluid regulation and muscular, thermoregulatory, and metabolic responses, as well as influence cardiovascular and respiratory performance. They also can cause pain, fatigue, transient weight gain, and sleep disturbance.1

The effects of these variations on athletic performance are highly complex and highly individualised. Variables such as hormonal contraceptives can influence these effects. For these reasons, very few scientific studies have been conducted on the topic. A 2021 review of the scientific literature concluded that, “Different sports performance-related parameters are affected during the menstrual cycle among elite athletes, but the parameters themselves and the magnitude and the direction of the effects are inconclusive.”2

While sports scientists have not been able to clearly identify effects on athletic performance, many women know how their own performance varies throughout their menstrual cycle. They know when they are at their strongest, their most flexible, and have their greatest endurance. They also know when they are the most fatigued, need the most recovery, and are the least motivated.

Clearly communicating this information to coaches can help optimise a training program. Informed with this knowledge, as well as daily basal body temperature data, a coach can prescribe training that is most intense during certain times in a woman’s cycle and give extra recovery during others.

And for women who cannot currently identify athletic performance changes throughout their cycle, it is possible that methodical tracking of their basal body temperature would help them do so.

Those who want further understanding of the physiological changes throughout the menstrual cycle, and how they affect athletic performance, may be interested in the following articles.

The Effects of Menstrual Cycle Phase on Elite Athlete Performance: A Critical and Systematic Review.

The Impact of Menstrual Cycle Phase on Athletes’ Performance: A Narrative Review