As a new technology, we are often asked by athletes, researchers and media about the accuracy of CORE. We have spent over five years in research and development and for our launch, many of the studies are from our testing or joint projects with clinical researchers and medical institutions.

There are a series of independent studies currently underway with sporting institutes, medical facilities and other research groups and as these become available, we will add them here.

CORE uses a thermal energy transfer sensor (not skin temperature) and we validate against other ‘accurate’ methods, most commonly the ingested e-pill as this is best suited for sporting activity.

CORE can now be sold as a clinical thermometer for use in the United States.

For more in-depth information on the scientific data validation for cores accuracy, can be found here.

We continue to work on CORE Accuracy and validation in various real-life conditions with a wide variety of participants who each have their own unique thermoregulation response.

In the following article we have documented our testing approach, data collection and validation for sports. In our internal testing we validate against other accurate testing methods such as e-pills and have provided an overview of this validation including a number of graphs.

The CORE was validated in an independent clinical study led by Miloš Ajčević, Alex Stella and co-workers at the Cattinara University Hospital ASUGI in Trieste, Italy. The study was performed on 30 partially febrile stroke patients over 6 months.

The study showed a good agreement of the CORE with commonly used tympanic ear temperature measurements with no bias and a Limit of Agreement of: LoA 95% CI −0.55 – 0.77°C. The CORE measured effectively and accurately fever which is crucial for early detection of the deterioration of stroke patients. The detection was performed correctly in 94% of the cases. Hyperthermia and fever were defined respectively for temperatures above 37.5°C and 38.3°C

The following graph represents the accuracy (LoA) of the CORE solution determined for this specific study in comparison with other clinical thermometers. 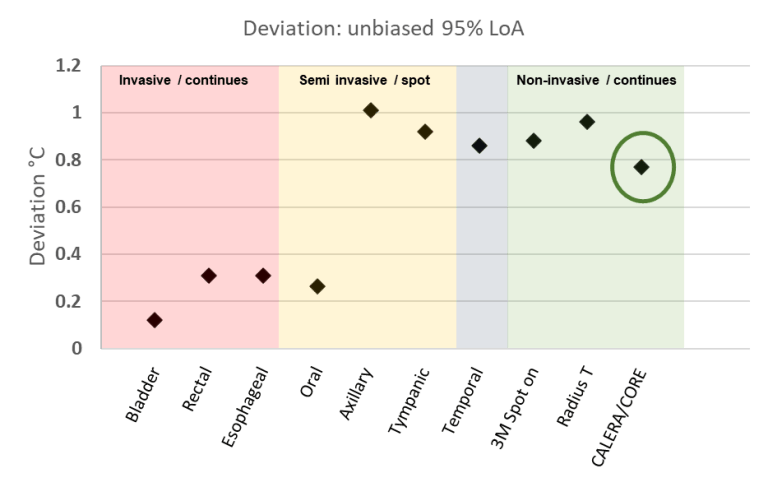 Figure 1 Accuracy (LoA) comparison of the CALERA® solution determined for this specific study in comparison with other clinical thermometers.

The corresponding exact values and references are given in the Table 1 below:

The thermal energy transfer sensor technology used in the CORE Body Temperature monitor is successfully being used in a Swiss based research project for early detection of Alzheimer and Parkinson diseases.
View Datasheet (PDF 910 KB)

Abstract: Alzheimer (AD), and Parkinson Diseases (PD) are reported to manifest themselves in changes to the circadian rhythm. A novel virtual wearable  wrist-worn sensor, deployable in free living conditions, enables long-term predictive monitoring of the core body temperature, which is the only health marker directly linked to the circadian rhythm. The goal is to distinguish between normal and pathological core body temperature trajectories.

For this project completed in 2018, an early version of CORE was used at the INSEL hospital in a sleep study. Progress has been made since this study was published but even then the researchers were already satisfied with the results and could see the potential for this technology.
Visit Project Page: zhaw.ch

Project: Noninvasive core body temperature sensor for wearable sleep monitoring devices. The objective of the project was to create a proof of concept that it is feasible to estimate the core body temperature from the wearable sensors using the skin temperature and heat flux sensors. In the course of the project, a prototype of a standalone wearable sensor device was developed. The sensor is lightweight and allows for non-invasive continuous estimation of Core Body Temperature with an average error smaller than 0.4 centigrade, using the measurements of the skin temperature and thermal energy transfer sensor.